Now Available! The Education of Sabina 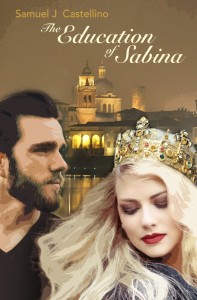 Twelve-year-old Princess Sabina of Milan is visiting her grandmother over the summer in the Italian city of Asti. On her way to the park, she reaches a clump of tress. Who should she spy but bad boy Marcus, also twelve, who is swinging from the top of a young tree by rocking its thin trunk back and forth. On a dare, Sabina joins him on the next tree. They swing a few minutes then stop and have a lively debate about girl-boy relationships. So starts their secret eight-year romance.

The year is A.D. 394 and times are dire for the Roman Empire, besieged by barbarians from the north and racked by treacheries from within. A good marriage for Sabina would solidify the safety of her people. To ensure this, her parents send her to Athens then Constantinople to get the best education and exposure possible. One potential husband who is completely unacceptable to Sabina is Prince Lucius. Though he is her nemesis, he desires Sabina for her personhood and inheritance.

After each stay abroad, Sabina returns home, and she and Marcus pick up where they left off. Her five years overseas have educated her in rhetoric, languages, and politics. Marcus has been educating her in something else.

In time, their clandestine love affair comes to an end. Marcus is shipped off to Germania as a soldier in the Roman legion, and Sabina is assigned to Ctesiphon, the capital of the Persian Empire. They are now three thousand miles apart and there is no way they can be together. Or is there? The Education of Sabina tells the tale of how Sabina encounters both Lucius and Marcus again in a confrontation in Asti in A.D. 402.