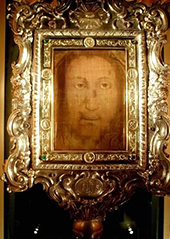 We are the image of God; “I know because the Bible tells me so.” How are we the image of God? We are the image of God in three ways: resemblance, participation, and becoming. In resemblance, our image is like a tall, upright mirror standing outside facing the sun. But our mirror starts off covered in dust and mud because of the Fall of Adam and Eve. The Father as sun shines on our dirty mirror. The heat of the sun slowly dries up the mud until it cracks and falls off or deteriorates into a fine dust covering the mirror’s surface. Solar winds from the sun blow the dust off so that, over time, between the heat of the sun and the solar winds, our mirror slowly becomes cleaner and cleaner, thereby making the image of the sun on the mirror clearer and clearer. From a faint image with some outlines of the sun, to a round sun in a haze of dust, to a brightly reflected sun—these are the steps of progress the Father as sun makes on our mirror until only a spotless mirror remains, a mirror where one can see in clear detail on its surface the radiant sun of the Father. This is the image of God in resemblance.

In participation, the image of a mirror is replaced with three hollow glass balls lined up in a row, like the sun and two planets lined up, one in front of the other. The first hollow glass ball is the sun. The second is an orb covered in mud and dust like the mirror. The third orb is behind the second and is also covered in mud and dust. Like the sun in the mirror analogy, the sun shines on the dirty second orb which is spinning on its axis. The heat of the sun dries the mud and the spinning of the orb flings off the mud’s dried flakes. Dust on the orb is blown off by the solar winds and the centrifugal force of the spinning orb. As the second glass orb becomes more and more clean, the reflection of the sun off its surface becomes clearer, as in the mirror analogy. But something also takes place with the orb. As it becomes clearer, more of the sun’s light passes through it to hit the dirty third orb. The second orb acts as a secondary source. The light and heat coming through it dries the mud on the third orb, and the centrifugal force of the spinning third orb throws off the dust and dried flakes sitting on it. The third orb becomes cleaner and cleaner due to the efforts of the second orb. Here, the second orb participates with the sun to make clean the third. The second orb is the image of God in participation.

Something further happens to the second orb in addition to letting the sun’s light pass through it to hit the third. The second orb, like the third, is a hollow glass ball. Like the sun, it is filled with hydrogen atoms. But, unlike the sun, its hydrogen atoms have not reached a fusion state where it self-generates light and heat. In the beginning, the second orb is only a pass-through device. Then, as the sun cleans the surface of the second orb, the sun’s light and heat stimulate the hydrogen atoms within it. The cleaner the second orb, the hotter it becomes inside, and the more stimulated become its atoms. When the second orb’s surface becomes completely clean, the temperature inside rises higher and higher until the point of nuclear fusion takes place. At that point of internal temperature, nuclear fusion ignites, and the second orb is no longer merely a pass-through device, but a sun itself. It is a sun the same as the sun that shone on it. The second orb as sun is now a self-sustaining sphere of light and heat, and blasts the dust and dirt off the third orb, just as the sun did to it. The original sun has made a second sun. The orb as second sun is said to be the image of God in becoming.

Our image of God is much more than an image of resemblance. It moves from an image of resemblance to an image of participation to an image of becoming. We are the daughters and sons of God, because God’s end gain for us is an end of becoming, in becoming like him. The question arises, “Is this becoming a becoming in act only, because we only act like God, or is it more? Is it also a becoming of being?” Catholics believe that you are what you do. By default, we are the image of God in becoming, a becoming not only in act but also in being. For, as in the Prodigal Son, the Father holds nothing back from us; all that is his is ours, so that in the end, we are like him in act and in being, as explained in the following chapters.

The above is an extract from the chapter “Image of God” in my book The Prodigal Son Revisited: Exit and Return of Angels, Humans, and the Trinity by me, Samuel J Castellino.