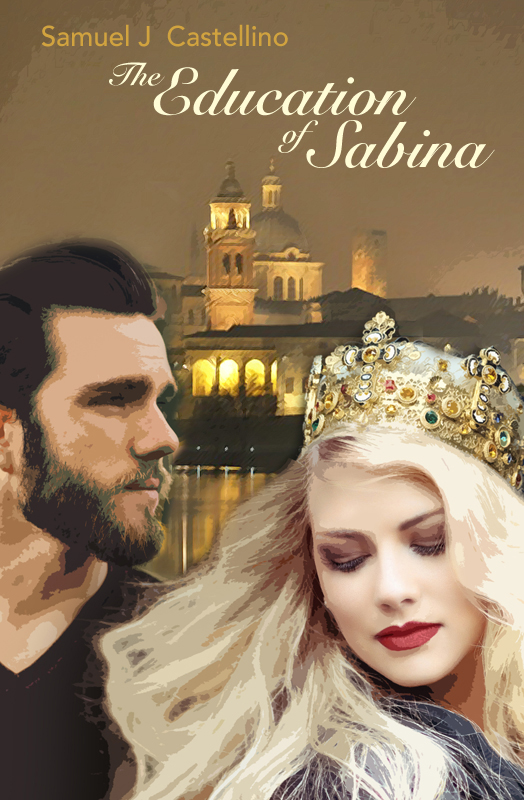 “Whatcha doin’?” asked Sabina, puzzled at what she was seeing.

“Oh, I’m not sure,” Sabina said, drawing out the word sure.

“I can climb a tree very well, thank you.” Sabina walked over to the tree right next to Marcus’s and quickly climbed.

He looked at her and was quite impressed. “Boy, you can climb.”

They swung back and forth, pushing their bodies forward and backward to gain momentum. The hard part was getting started. But once they did, it was easier and easier to swing farther forward and backward each time. How far they went depended on how brave they were. And Sabina and Marcus were very brave. The trees were adolescent trees. They were tall and lanky and very flexible with all the greenness within their thin trunks. If anyone saw Marcus and Sabina from afar, they looked like two marshmallows on a stick, their white tunics swinging in the breeze.

“Whoa, this is great!” exclaimed Sabina.

They swing some more in silence. Then he stopped. Following his lead, she stopped. He looked out over the horizon and said, “Do you like the view?”

He pointed to a neat, trim ball field and said, “See them playing over there?”

“Yes. It looks like they’re having fun. How come you’re not over there playing with them?”

“I’m not into structured sports.”

“With adults telling you what to do and all those rules to follow.”

“What’s wrong with that?”

“Oh, I play. I play over there.” He pointed to a scraggly field.

“With a couple of boys I know.”

“Well, if you’re not in a league, it must be hit and miss when you play.”

“One of us usually makes the rounds to the other boys’ homes and asks if they want to play.”

“So you’ll play in that field over there with all the rocks and scrub grass, but you won’t play on a manicured lawn because you’re a bad boy?”

“That’s right. Besides, it takes more guts to play over there. It’s a lot harder because of all the stones and things sticking out of the ground. It takes a lot of courage to bend over and catch a grounder knowing it might hit a rock, bounce up, and smack you in the face. You don’t see that over at that manicured field where it’s all safe and neat.”

“So you‘re a bad boy because you play in a field of stones? I don’t buy it. It takes more than that to be a bad boy.”

“No. That’s not all. I play cards with the big boys.” He pointed to a section of the park where a card game was taking place. “See those guys over there playing cards?”

“Well, they’re all older than me—eighteen years old and older. I play cards with them. They’re a rough group, all getting in trouble with the law. Some were arrested for shoplifting and fighting. What do you think of that? Does that sound bad or what?”

“Hmm. That does sound bad.”

“You wouldn’t play with them, would you?”

There was a pause. Marcus waited for the fact he was no goody-goody to sink in.

Sabina reevaluated what she thought of him. “No,” she said to herself, “he’s no braggart. Maybe he is a bad boy. He certainly is not what I would call good, that’s for sure.”

Then she said, “So you play cards with a bad bunch of dudes. You must be pretty good then.”

“Yes, I’m quite good. Sometimes we play in teams, and everyone wants me to be on their team. See those people by that cart?” Sabina’s eyes followed Marcus’s hand gesture to a cart in the distance.

“They’re twenty-two-year-olds who are here to do community service.”

“Oh, I know about that. That’s a program started by our governor.” Sabina had heard good things about the program.

But she received an unexpected response. With a snarl in his voice Marcus said, “They’re here to rehabilitate us.”

“I wouldn’t say that,” scolded Sabina. She took offense at Marcus’s characterization of the governor’s program.

Marcus knew he was wrong as soon as he said the word rehabilitate. He was angry at the idea of anyone thinking they needed outside help. And rehabilitate wasn’t the right word to express this feeling. “You’re right. I didn’t use the right word. Sorry. The governor is a good guy.”

Sabina perked up. She was happy to hear Marcus call the governor a good guy. She softened her tone. “Sorry. I shouldn’t have snapped at you like that. I don’t think the governor means to offend anyone with his program. It’s just that it came to his attention that there were not many activities for people our age to do over the summer. So he hired counselors to provide activities for us.”

“Oh. That’s how we got all those new activities like crafts and theater and a manicured ball field?”

There was a pause while Marcus studied Sabina. “How do you know that abut the governor?”

She thought fast. “That’s what I heard some say in the capital.”

Sabina quickly changed the topic of the conversation away from the governor. “How old are you, by the way?”

The above is an extract from the chapter “First Base” in my historical romance The Education of Sabina by me, Samuel J Castellino.